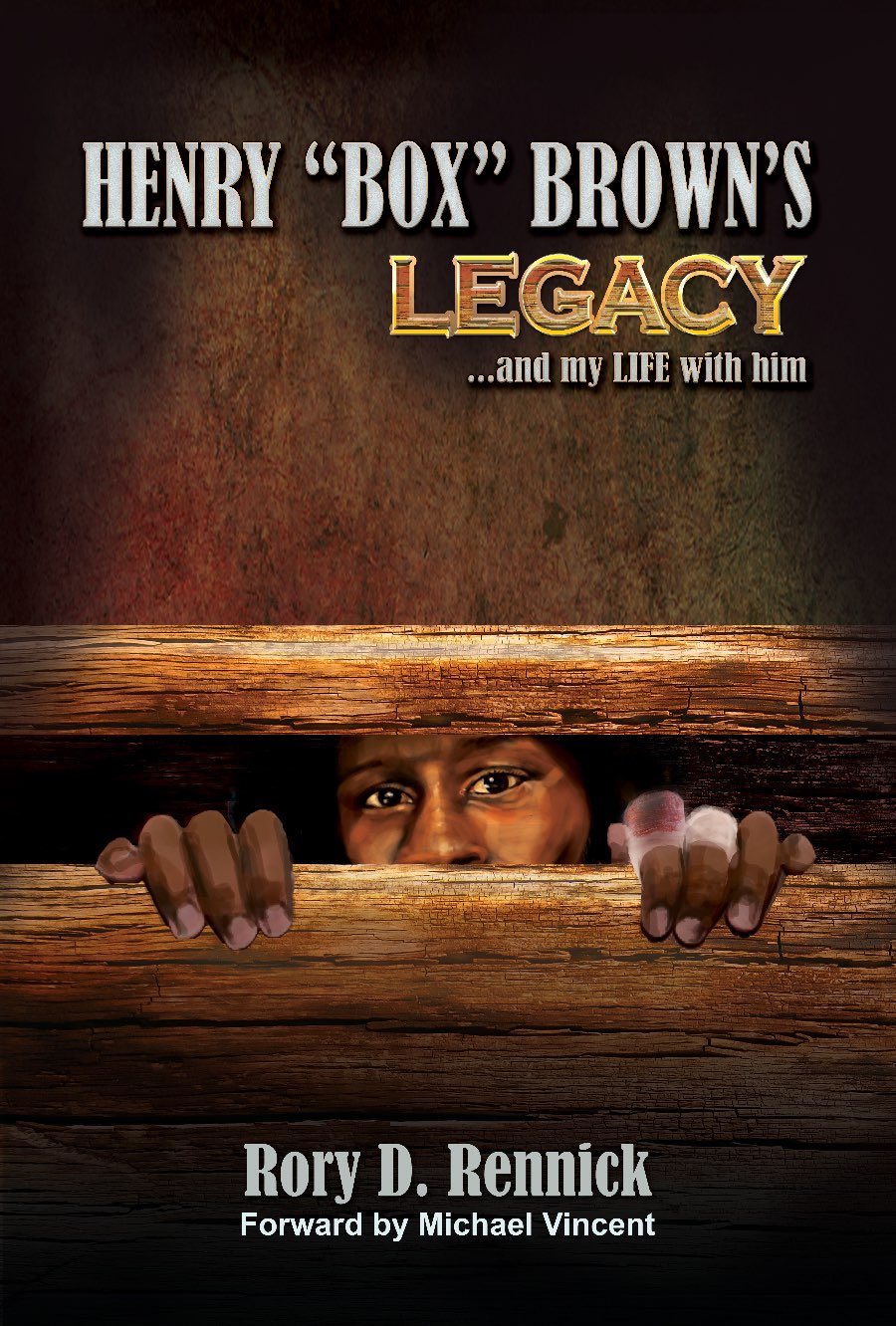 This limited (now less than 180) 270+ plus page hardback commemorative edition will be autographed and numbered. The price- $65 (no taxes or shipping).

Many have wondered what happened to the iconic escaped slave-turned-magician Henry “Box” Brown following his triumphant arrival in Philadelphia, nailed in a small wooden box.
Rory Rennick chronicles previously unknown facts of the enigmatic Brown in four countries with thoughtful and provocative commentary. Although separated by nearly 150 years- the cultural and mental divide between Rennick and Brown, is often mere inches or minutes. From the various entertainments (including mesmerism and acting), to the six court cases involving Henry, to his passing and the complex discovery and encounter with two of Henry’s descendants, the author invites you to experience a woven legacy of tragedies and triumphs.
BUY NOW

The courtroom remained largely as it was in the 1850s—with the exception of the addition of electrical lighting fixtures and a couple of air conditioning units that were added in the 1950s. The octagon-shaped room contained tapering pillars that extended upward slightly above the balcony’s ceiling. Above the balcony, the interior ceiling formed a beautifully designed dome. The distance from the main floor to the apex of the dome was close to 30 feet high. In the lower circular pit in the center of the room were a couple of benches where the attorneys and their clients would wait. Two jury pews were placed to the right of the judge’s chair and bench. To the right of the jury seats stood the elevated witness box, where the tellers of the best stories usually prevailed.

I stood in that box, envisioning what Henry experienced on that unforgettable day of his court testimony. I remember an overwhelming flood of emotions—mostly fear and anxiety. I could almost see the assembled courtroom audience, almost hear and feel the ambiance of the room where Henry had stood 168 years earlier. Slightly embarrassed by the power of the moment and its effect on me, I decided not to share with Dr. Chater what I imagined and felt as I pondered the past, standing motionless in that witness box.

On Wednesday, July 28, 1852, the courtroom was packed with onlookers anticipating the clash of two heavyweight storytellers: the performer and a baron of the press. The stakes and the residual implications from the outcome would be huge! The case was widely covered in more than 30 newspapers throughout England—and a few in the United States—with varying details. Reading the newspaper accounts is rich and revealing. The transcript reads like a made-for-television court room drama. I have paraphrased the court’s landmark decision here because I believe the details are worthy of an expanded exposition.

The Midland Circuit Court in Warwick, Judge Baron Alderson and a common jury heard the case of Brown vs. Smith. Henry “Box” Brown sued William Benjamin Smith, the proprietor of the Wolverhampton and Stafford Herald and the Birmingham Mercury for two libels. The subject of the charge being that two articles were inserted in the Wolverhampton and Stafford Herald “and reflecting upon the defendant in an unwarrantable manner. They professed to the criticisms upon a certain exhibition by the plaintiff, namely, a panorama, accompanied by a lecture.”

Henry was represented by Mr. Macaulay, Q. C., and Mr. Field; while W. B. Smith was defended by Mr. Sergeant Millar and Mr. Hayes. The court, presided over by the same Judge Alderson, but having seated a special jury, heard a murder case earlier that day. The referee and the two fighting teams weighed in and took their respective positions. The plaintiff’s corner was heard first, throwing the first punch.

“The rich and important history of African magicians has been buried and lost under the rubble of enslavement, Jim Crow and systemic racism. Over the past 15 years Rory took on the role of a historical literary archeologist and dug deep beneath the surface to unearth the remarkable journey of Henry “Box” Brown, from being enslaved to a world-renowned activist and magician.”

~ Ran Shine  *Creator and Founder of the Heart & Soul of Magic

“The author has immersed himself into a story that links the past with the present. I invite you to take a walk inside the soul of Henry “Box” Brown, and once you return, take a look back and see whose soul you really examined. You will see the soul of author Rory Rennick and perhaps your own.”

“Bravo to Rory Rennick for delivering such a wonderfully nuanced history of America's most iconic black magician, Henry Brown. He regales us with parts of Brown’s journey, never told before, with great emotion and frankness. Rennick also thoughtfully wades into the controversial waters of racism throughout Brown's life. This book also becomes a memoir of the author’s path in a quest for Brown’s identity. A must-read for everyone.”

~ Lee Asher  *Magician and President of 52 Plus Joker

"I am very grateful and happy that you have found my great-great grandfather and my family. He is an intriguing figure.”

SCROLL UP TO BUY YOUR COPY NOW